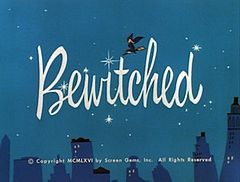 Bewitched is an American situation comedy originally broadcast for eight seasons on ABC from 1964 to 1972, starring Elizabeth Montgomery, Dick York (1964–69), Dick Sargent (1969–72), Agnes Moorehead, and David White. The show is about a witch who marries an ordinary man and tries to lead the life of a typical suburban housewife. Bewitched enjoyed great popularity, finishing as the number two show in America during its debut season. The show continues to be seen throughout the world in syndication and on DVD and was the longest-running supernatural-themed sitcom of the 1960s–1970s era.