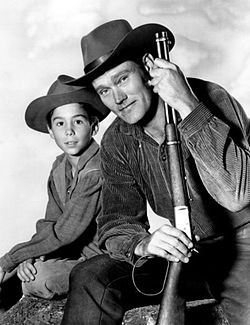 The Rifleman is an American Western television program starring Chuck Connors as homesteader Lucas McCain and Johnny Crawford as his son, Mark McCain. It was set in the 1880s in the town of North Fork, New Mexico Territory. The show was filmed in black-and-white, half-hour episodes. "The Rifleman" aired on ABC from September 30, 1958 to April 8, 1963 as a production of Four Star Television. It was one of the first prime time series to have a widowed parent raise a child.

The series centered around Lucas McCain, a widowed Union Civil War veteran (a lieutenant in the 19th Indiana Volunteer Infantry Regiment) and a homesteader. McCain and his son Mark lived on a ranch outside the fictitious town of North Fork, New Mexico Territory.

The pilot episode, "The Sharpshooter", was originally telecast on CBS as part of Dick Powell's Zane Grey Theater on March 7, 1958; it was repeated (in edited form) as the first episode of the series on ABC. Regulars on the program included Marshal Micah Torrance (R. G. Armstrong was the original marshal for two episodes, the first and the fourth), Sweeney the bartender (Bill Quinn), and a half-dozen other residents of North Fork (played by Hope Summers, Joan Taylor, Patricia Blair, John Harmon and Harlan Warde). Fifty-one episodes of the series were directed by Joseph H. Lewis (director of 1950's Gun Crazy and known for his film noir style). Ida Lupino directed one episode, "The Assault". Connors wrote several episodes. Robert Culp (of CBS's Trackdown) wrote one two-part episode, and Frank Gilroy wrote "End of a Young Gun".

The February 17, 1959 episode of The Rifleman was a spin-off for an NBC series, Law of the Plainsman, starring Michael Ansara as Marshal Sam Buckhart. In the episode "The Indian", Buckhart came to North Fork to look for Indians suspected of murdering a Texas Ranger and his family.[2]

The series was set during the 1880s; a wooden plaque next to the McCain home states that the home was rebuilt by Lucas McCain and his son Mark in August 1881. Westerns were popular when The Rifleman premiered, and producers tried to find gimmicks to distinguish one show from another. The Rifleman's gimmick was a modified Winchester Model 1892 rifle, with a trigger mechanism allowing for rapid-fire shots. Despite the anachronism, Connors demonstrated its rapid-fire action during the opening credits on North Fork's main street. Although the rifle may have appeared in every episode, it was not always fired; some plots did not require violent solutions (for example, a cruel teacher at Mark's school).

A common thread in the series is that people deserve a second chance; Marshal Micah Torrance is a recovering alcoholic, and McCain gives a convict a job on his ranch in "The Marshal". Royal Dano appeared as a former Confederate States of America soldier in "The Sheridan Story" who is given a job on the McCain ranch and encounters General Philip Sheridan, the man who cost him his arm in battle. Learning why the man wants him dead, Sheridan arranges for medical care for the wounded former foe, quoting Abraham Lincoln's last orders to "...bind up the nation's wounds".

McCain had human foibles. In an episode with Phil Carey as former gunman (and old adversary) Simon Battles, he is unwilling to believe the man has changed and become a doctor. It takes a gunfight (with Battles fighting alongside him) to make him admit he is wrong. In "Two Ounces Of Tin" with Sammy Davis, Jr. as Tip Corey (a former circus trick-shot artist turned gunman), McCain angrily orders him off the ranch when he finds him demonstrating his skills to Mark. McCain had a reputation in the Indian Territories of Oklahoma, where he first acquired the nickname "the Rifleman" and where Lucas' wife died in a smallpox epidemic.

The series was created by Arnold Laven and developed by Sam Peckinpah, who would become a director of Westerns. Peckinpah, who wrote and directed many episodes, based many characters and plots on his childhood on a ranch. His insistence on violent realism and complex characterizations and his refusal to sugarcoat the lessons he felt the Rifleman's son needed to learn about life put him at odds with the show's producers at Four Star. Peckinpah left the show and created a short-lived series, The Westerner with Brian Keith.

Click here to watch the classic episode The Sharpshooter