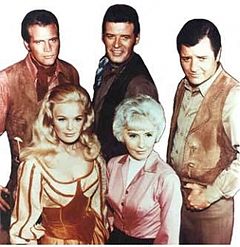 The Big Valley is an American western television series which ran on ABC from September 15, 1965, to May 19, 1969. The show stars Barbara Stanwyck, as the widow of a wealthy nineteenth century California rancher. It was created by A.I. Bezzerides and Louis F. Edelman, and produced by Levy-Gardner-Laven for Four Star Television.

The TV series was based loosely on the Hill Ranch located at the western edge of Calaveras County, not far from Stockton. One episode placed the Barkley Ranch a few hours' ride from town while another has Jarrod riding past a Calaveras County sign on his way to the TV series' ranch.[citation needed] The Hill Ranch existed from 1855 until 1931, exceeded 1,000 acres (4.0 km2), and had the Mokelumne River running through it. Lawson Hill ran the ranch until he was murdered in 1861. His wife Euphemia (aka "Auntie Hill") then became the matriarch. During their marriage they had four children, one daughter and three sons. Today, the location of the ranch is covered by the waters of Lake Camanche. A California state historical marker standing at Camanche South Shore Park mentions the historic ranch. The set used to film the exterior of the Barkley Mansion stood on the back-lot of Republic Studios from 1947 until 1975.

In the first episode, "Palms of Glory," the grave of Thomas Barkley (1813–1870) is shown after it is commented that he fought the railroad six years ago establishing that the show was initially set no later than 1876.

In "The Odyssey of Jubal Tanner", Jubal states to Victoria Barkley that he's been gone 30 years since his wife Margaret Tanner's death, her grave showing her passing away in 1854; this appears to indicate that the series starts in 1884. However, in another episode, a newly dug grave has a marker with the year 1878, so the best can be said is that the events of the series take place sometime in the late 1870s or early 1880s.

Click here to watch the classic episode Paths of Glory