9. The Guns of Will Sonnett 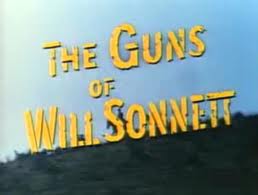 The Guns of Will Sonnett is a Western television series set in the 1870s which ran on the ABC television network from 1967 to 1969. The series was the first production collaboration between Aaron Spelling and Danny Thomas, who would later go on to produce one of ABC's most-memorable hits, The Mod Squad. Today, the series is distributed by King World (now CBS Television Distribution), and, when telecast, is usually seen in tandem with Branded.

This series starred veteran character actor Walter Brennan as Will Sonnett, and Dack Rambo as his grandson, Jeff, who were searching for Will's son and Jeff's father, James. Disgusted with his father's being absent on army-scout business more often than not, James (also called Jim) had disappeared at the age of seventeen. A few years later, a baby boy was delivered to Will, with a letter identifying him as James' son. It went on to say that his mother had died in childbirth, and that not very many people get a second chance in life, but this was one for Will. The young boy was raised by his grandfather, who was grateful for the opportunity and did the best that he could to steer the grandson in the right direction.

The elder Sonnett was capable with firearms and often spoke to strangers about this prowess in a way that intimidated them. In the first episode, he mentions that his son is an expert with guns, while his grandson is better, "and I'm better than both of 'em -- no brag, just fact." This last phrase appeared frequently on the show, and became a catch phrase with many of the show's younger fans.

Apparently Will's absences had been significantly less than total, as he had taught James how to handle a six-shooter, and the younger man had become renowned as a peerless gunfighter. Hearing so much of his father's repute, Jeff decided he had to find him. Will agreed, and they rode across the West looking for their common relative. They often arrived at places which had been recently vacated by James. The inhabitants of those communities had mixed opinions of James, some seeing him as a ruthless killer, others as the only man brave enough to take the side of justice against other men far more ruthless. The middle Sonnett did in fact appear in several scattered episodes, invariably played by Jason Evers. One of those segments, entitled "The Man Who Killed Jim Sonnett" guest starred character actor Robert F. Simon.

Unlike most series with a similar premise, the problem was resolved during the life of the series. In the second season finale, "Three Stand Together", Will and Jeff eventually located and linked up with James. The three became lawmen together in   a small town, Will as town marshal and the other two as his deputies. Had there been a third season for this series, it would have been as a much more conventional Western.