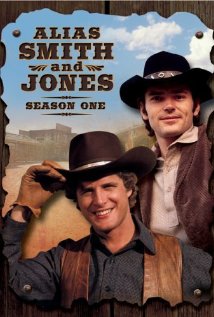 Alias Smith and Jones is an American Western series that originally aired on ABC from 1971 to 1973. It stars Pete Duel as Hannibal Heyes and Ben Murphy as Jedediah "Kid" Curry, a pair of cousin outlaws trying to reform. The governor offers them a promise of conditional amnesty, but he wants to keep the pact under wraps for political reasons. The condition is that they will still be wanted—until the governor can openly say they have reformed and henceforth warrant clemency.

Alias Smith and Jones began with a made-for-TV movie of the previous year called The Young Country, about con artists in the Old West. It was produced, written and directed by Roy Huggins, who served as executive producer of AS&J and, under the pseudonym of John Thomas James, at least shared the writing credit on most episodes.

Roger Davis starred as Stephen Foster Moody, and Pete Duel had the secondary but significant role of Honest John Smith, while Joan Hackett played a character called Clementine Hale, the same name as a part played on two AS&J episodes by Sally Field. This pilot was rejected, but Huggins was given a second chance and, joined by Glen A. Larson, developed Alias Smith and Jones. Both The Young Country and the series pilot movie originally aired as ABC Movie of the Week entries.

Alias Smith and Jones was made in the same spirit as many other American TV series, from Huggins' own The Fugitive to Renegade, about men on the run crisscrossing America and getting involved in the personal lives of the people they meet. One major difference was that Hannibal Heyes and Kid Curry were guilty of the crimes that they were accused of committing, but were trying to turn over a new leaf.

The series was inspired by the success of the 1969 film Butch Cassidy and the Sundance Kid, starring Paul Newman and Robert Redford (Universal contract player Ben Murphy was handed to the producers because he was considered a Paul Newman lookalike.)[3] There were a number of connecting themes: Murphy's co-lead character was named "Kid Curry" -- which was also the nickname of Harvey Logan, an associate of the real Butch Cassidy, played in that film by Ted Cassidy (no relation to Butch) . However, unlike the TV version, the real Kid Curry was a cold-blooded killer.

The series also featured a group of robbers called the Devil's Hole Gang which was based on the Hole in the Wall Gang from where Cassidy recruited most of his outlaws. However, in order to lend them an element of audience-sympathy, Hayes and Curry were thematically presented as men who avoided bloodshed (though Curry did once kill in self-defense) and were always attempting to reform and seek redemption for their "prior ways".

The names "Smith and Jones" originated from a comment in Butch Cassidy and the Sundance Kid when, prior to one of their final hold-ups, the characters are outside a bank in Bolivia and Sundance turns to Butch and says: "I'm Smith and you're Jones."