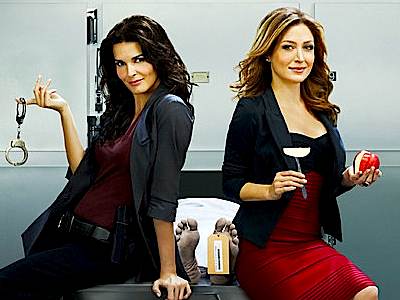 Rizzoli & Isles is a TNT television series starring Angie Harmon as police detective Jane Rizzoli and Sasha Alexander as medical examiner Dr. Maura Isles. The one-hour drama is based on the Rizzoli & Isles series of novels by Tess Gerritsen. It premiered on July 12, 2010. On June 29, 2012 it was renewed for a 15 episode 4th season.

The series' backstory is inspired by The Surgeon. Boston detective Jane Rizzoli (Angie Harmon) was investigating a serial killer named Charles Hoyt (Michael Massee) some time before the series began. Hoyt, who was banned from medical school for fondling a corpse, used his vast medical knowledge to systematically torture and kill people, usually couples so he could induce the most fear into his victims. Rizzoli is able to find where Hoyt is. As she is searching for him, she is hit in the back of the head and knocked unconscious. She is pinned to the floor by scalpels. As Rizzoli is waking up, we see Hoyt preparing to cut Rizzoli's throat. Vince Korsak (Bruce McGill), Rizzoli's partner, finds where Rizzoli is and shoots Hoyt before he can slit her throat, saving Rizzoli's life. Rizzoli reasons that, after seeing her so vulnerable, Korsak would never trust her as his partner and decides to apply for a new partner.