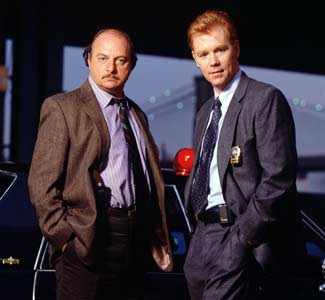 The show was created by Steven Bochco and David Milch and was inspired by Milch's relationship with Bill Clark, a former member of the New York City Police Department who eventually became one of the show's producers. The series was broadcast on the ABC network from its debut on September 21, 1993‚ and aired its final episode on March 1, 2005. It remains ABC's longest-running primetime one-hour drama series.

The show was initially a vehicle for David Caruso. In a departure from previous Bochco series, John Kelly was the main character and the first season revolved around him and his professional and personal lives (promo shots for the show depicted Caruso in the foreground and other first-season characters set off behind him). Season 2 saw the departure of John Kelly, and with his departure, the decision was made to return to a more ensemble series. Dennis Franz, as Andy Sipowicz, a veteran New York City Police detective, eventually evolved into the show's lead character, taking more and more of a mentorship role as the series progressed (to the point of finally being promoted to sergeant and running the detective squad at the end of the series finale). His principal co-stars included (Season 2 and beyond) Jimmy Smits as Det. Bobby Simone (1994–1998), Rick Schroder as Det. Danny Sorenson (1998–2001) and Mark-Paul Gosselaar as Det. John Clark Jr. (2001–2005). Each was paired with Franz's Sipowicz, providing a younger and more suave foil to the abrasive, tragedy-prone detective.